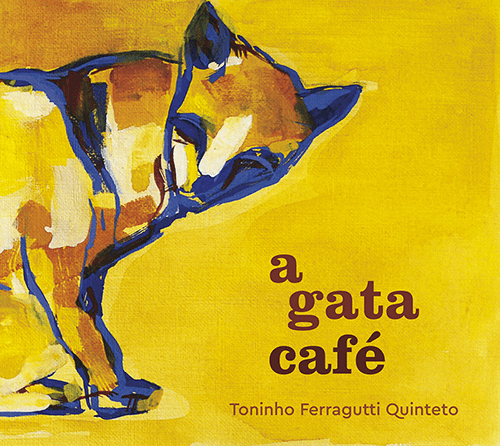 It is likely that Toninho Ferragutti is chosen as the most complete accordion player in Brazil in a survey conducted with specialists. Along three decades, this eclectic musician and composer from Sao Paulo has shown his talent in many concerts and recordings, playing choro, waltz, samba, Brazilian northeastern and southern rhythms, jazz, instrumental music and classical music – which is rare among accordion players in Brazil.

His easiness to play in a variety of music genres and styles, as well as his technique – always used in a passionate way – can be noticed in “A Gata Café”, Ferragutti’s 10th album, released with Borandá’s quality label, in a long-lasting partnership. Recorded in Sao Paulo in January, 2016, this album brings together 10 compositions created by the accordion player and arranger.

Those who know Ferragutti’s discography can tell that, on the last decade, he has tried a variety of chamber groups in his albums: a string quintet in “Nem Sol Nem Lua” (2006); a nonet in “O Sorriso da Manu” (2012); duets with the accordion player Bebê Kramer, with the violist Neymar Dias or with the guitarist Marco Pereira in “Como Manda o Figurino” (2011), “Festa na Roça” (2013) and “Comum de Dois” (2014), respectively.

Planning the album “A Gata Café”, Ferragutti decided he wanted a jazz-like quintet. He invited four young talented musicians from the instrumental music scene with whom he had played separately before: the saxophonist Cássio Ferreira, the drummer Cleber Almeida, the bass player Thiago Espírito Santo and the guitar/electric guitar player Vinícius Gomes.

“With the opportunity to make an album, I thought they were perfect for this kind of project”, commented the accordion player, highlighting the qualities of his new partners. “They are tuned to the latest in music, they are in their thirties and produce, compose and play any music style, with no technical difficulties. Besides, they all have their own musical work. I am a huge fan of this generation.”

Like his partners on the quintet, Ferragutti has also grown up listening to many music genres. “Thanks to the accordion I was able to meet a more traditional side of the music. At the same time, I have always had interest in all kinds of music, including classical music and jazz”, said the musician, who was born in Socorro, state of Sao Paulo, and whose musical background is very different than the usual among accordion players.

“I listened to accordion players like Dominguinhos and Luiz Gonzaga in the late ’80s. I used to listen to many saxophonists, because my father used to play the saxophone”, said Ferragutti, admitting that this particular experience contributed to shaping his style. “The saxophone is a wind instrument with bamboo reed; the accordion has a steel reed. Both instruments are very similar, including the melody, the phrasing they play”, he explains.

Ferragutti had already participated in groups similar to the current quintet when he played in gafieiras in the ’80s. Establishing the repertoire for “A Gata Café”, he decided to record again two of his songs from that time: the involving choros “O Mancebo” (inspired by the album “São Paulo no Balanço do Choro”, by the pianist Laercio de Freitas) and “Chapéu Palheta”, originally recorded or the in the late ’90s.

“These choros were made for dancing. They have samba touches, that were developed in gafieira parties”, commented the musician, highlighting the strong influence received from this music genre. “I have always played choro. I like improvising when playing it, but keeping its structure, respecting the limits between choro’s typical flourish and improvisation.”

Another track that reminds these popular dance parties is the samba song “Santa Gafieira”, composed by Ferragutti around 2007 for the project “Panorama do Choro Contemporâneo Paulista”, already thinking about the quintet. “It’s one of those songs to play in the end of the night, at a gafieira, when people are going back home, like a goodbye theme”, he explains.

Also composed by order, the exciting frevo “Bipolar” was written because Spok, a saxophonist and maestro from Pernambuco state, asked for it. According to Ferragutti, he chose naming it like that because of his taste for melancholic songs. “In order to play frevo, you must be cheerful, but as I wrote this song I got sad and started choosing minor chords”, he admits, laughing on the idea.

Ferragutti’s lyricism is well represented by the soft waltz that named the album. “A Gata Café” was inspired by a real incident: a cat looking for a home that caught the attention of the accordion player and his neighbors, in the neighborhood of Pompéia in late 2015. “Everyone has a beautiful side. Because of this cat, people showed their solidarity. Everybody used to leave some food and water for her. Then she started entering my house, and now she sleeps in my bed.”

Curiously, only after a few weeks, when he had already composed and named the waltz, Ferragutti found out that the beautiful Café was, in fact, a male cat. “I studied veterinary medicine for three years in Botucatu before moving to Sao Paulo. I guess I missed the class about cats”, he jokes. “Even if I knew it before, it wouldn’t change anything.”

The dancing “Com a Búlgara Atrás da Orelha”, first track of the album, was composed to be part of the soundtrack of the theatrical production “How To have Sex All Your Life With The Same Person”, monologue from the Argentinean Mónica Salvador, adapted by Odilon Wagner in Brazil, in 2012. “The ‘Bulgarian’ (búlgara) of the title refers to President Dilma [Rousseff] who, by that time, had a popularity rate of 90%”, explains the musician, who was inspired by the musical tradition from Eastern Europe to compose this song.

“Beduína” is another song influenced by the oriental music, and is a tribute from Ferragutti to his wife, the painter Cinthia Camargo, who was born on an Arabian family. Cinthia produced the album with him and is the author of the beautiful painting in the “A Gata Café” CD cover.

Although it was not composed with this purpose, “Egberto” is also a tribute. “I named it ‘Egberto’ because I think it has his style. It’s kind of a forró, full of pauses and spaces. Just like Hermeto Pascoal, Egberto Gismonti is essential to the Brazilian instrumental music and keeps inspiring people”, he commented, recognizing these influences.

“Cortejo do Rio do Peixe” is another highlight of the album and was also ready when Ferragutti named it in reference to the river that crosses his hometown. “I was raised by this river. The drums sound like a percussion and resembles the maracatu [rhythm], but it is not. Cleber made something more country-style. I like the symbiosis of the traditional and contemporary. The accordion allows us to do that a lot.”

There is also a tango among the diversity of Ferragutti’s music. “Nem Sol, Nem Lua”, originally recorded for an album that has the same name, released ten years ago, now has a more jazz-style arrangement that opens the path for creative solos by Vinicius Gomes (guitar), Cassio Ferreira (soprano saxophone) and the accordion player himself.

“In my compositions, I include the essence of what I listen to and what I like to play”, says Ferragutti, showing that he has already found his own place in the music scene. “There is a certain urbanity in this path I chose. I moved to Sao Paulo to be able to play French music, Italian music, to play in a symphonic orchestra, in choro groups, in gafieiras or in rock bands. If I lived in the Northeast, South or Midwest of Brazil, my sonority would certainly be different.”

Very conscious of his intentions as accordion player, composer and arranger, Ferragutti is an example to be followed – not only by accordionists – with his contemporary ideas that dialogues with tradition and several musical genres, without getting locked into regionalisms. Hopefully “A Gata Café” album will be just the first chapter of a long history to Ferragutti’s new quintet of aces in instrumental music.

Carlos Calado is a journalist, editor and music critic.